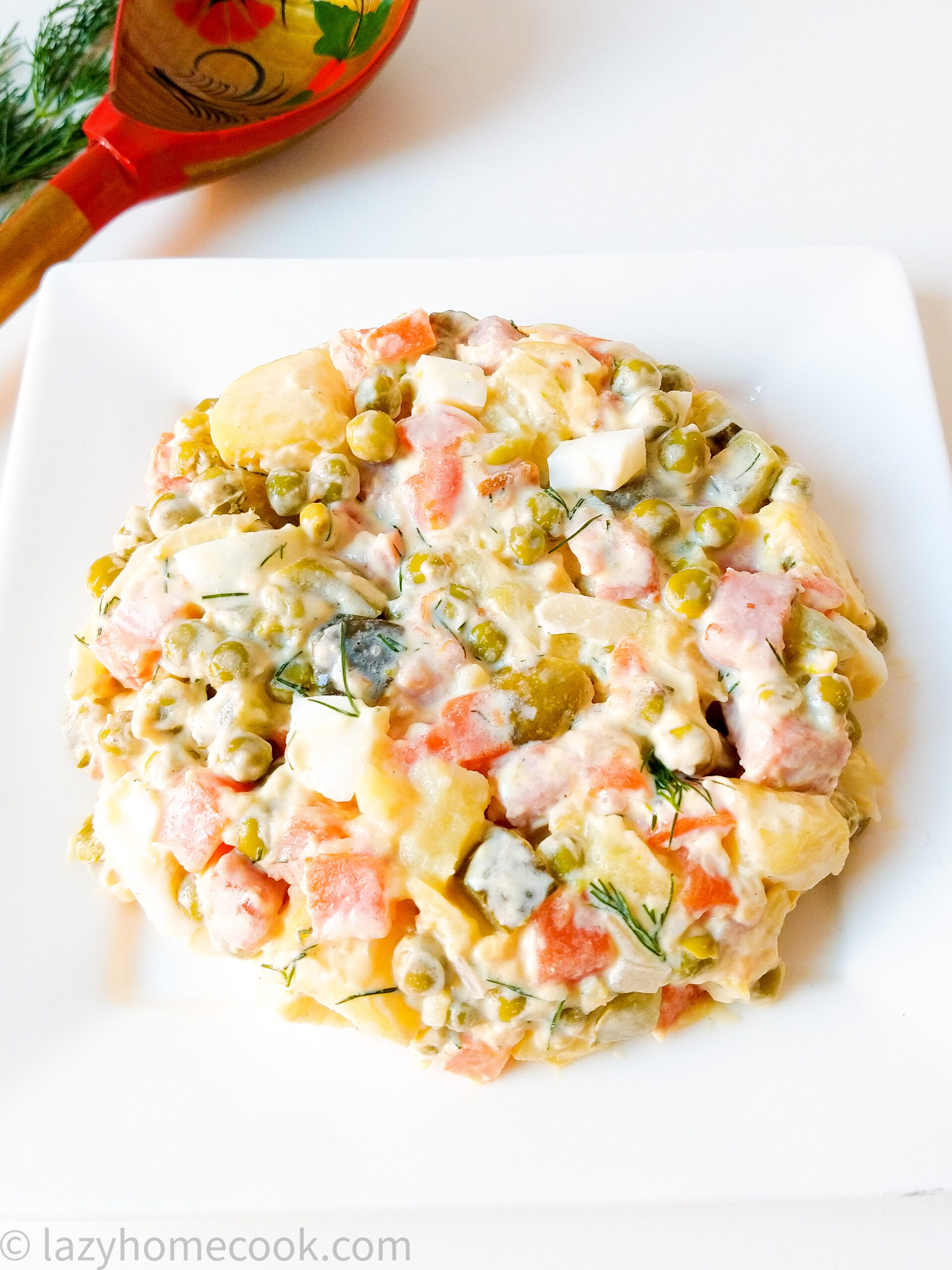 This salad is creamy, refreshing and bursting with flavor. It’s a perfect salad to have as a starter, side dish or even as a filling for sandwiches. Just like borscht, pelmeni or crab stick salad, Olivier salad is a popular Russian dish. The classic Olivier salad doesn’t have any bacon in it, but I found that bacon really adds to the taste of the salad and makes it so flavorsome! I mean, who doesn’t like crispy bacon?!

A little background information:
Olivier salad, often called the Russian salad,  was originally invented by Lucien Olivier for the Hermitage restaurant in Moscow in the 1860’s. It was later adapted by Ivan Ivanov, one of Olivier’s sous-chefs, who sold the recipe for media publication. Over the years, it gained popularity not only in Russia, but in many countries of the Former Soviet Union and Europe. In Russia, the salad has become one of the main dishes to serve during the New Year’s Eve celebrations.

Did you make this recipe? I’d love to see pictures of your creations on Instagram!
Tag @lazyhomecookk and hashtag it #lazyhomecook

Hi, and welcome!
I’m Jeanette, the blogger behind Lazy Home Cook.
Here I share all my delicious, easy
and family approved recipes with YOU.
Thank you for stopping by!
I’m happy you’re here. 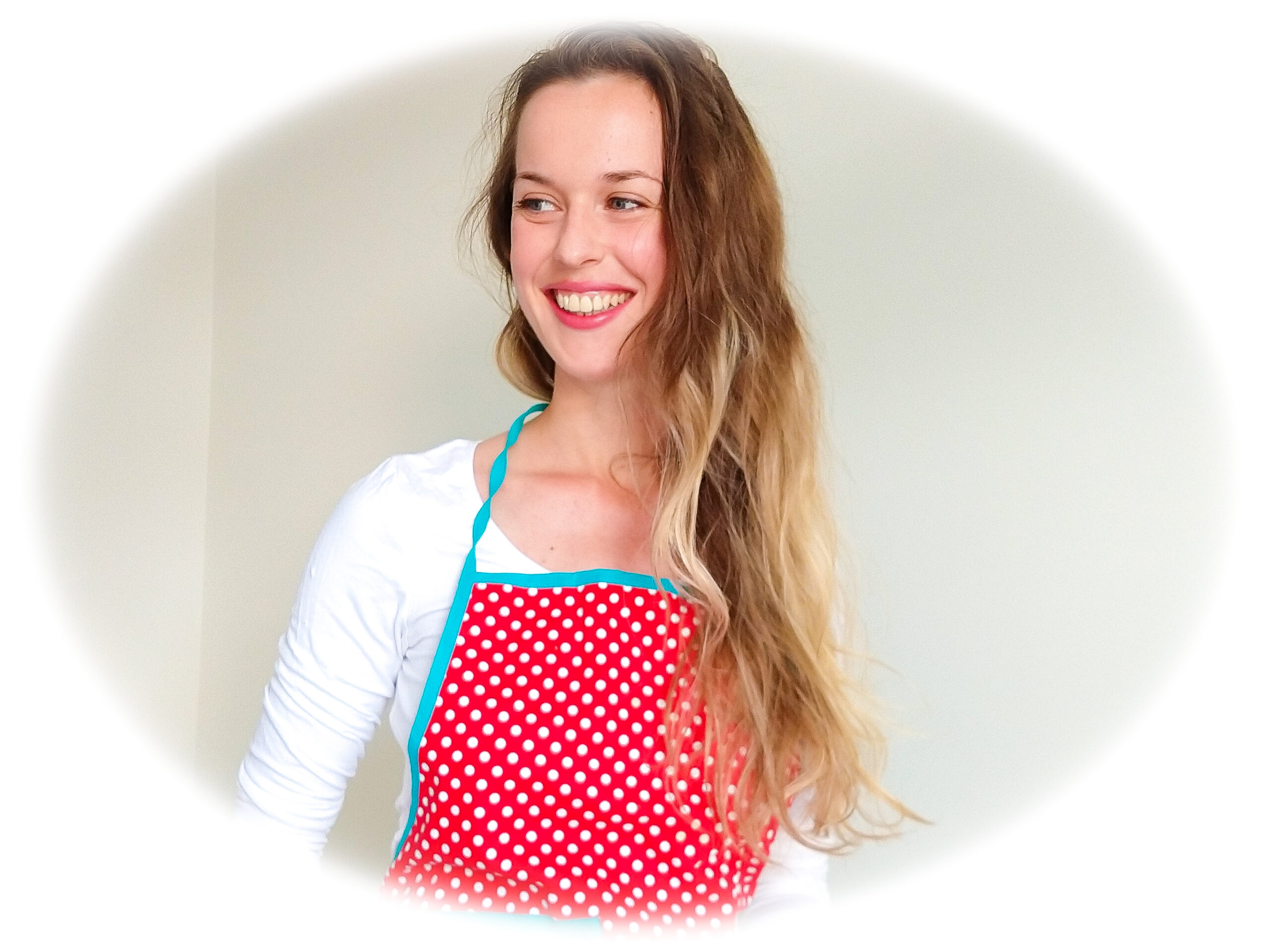 Hi, and welcome to my NEW food blog! Here I share all my homemade and family approved recipes on a regular basis. Although I LOVE to cook, I'm a lazy home cook too. So my recipes are (mainly) easy, quick and always delicious! P.S. I'm not a professional food photographer, so what you see is what you get. Great right?!

Search for a recipe

Search for a recipe

When you visit this site, it may store or retrieve information on your browser, mostly in the form of cookies. Out of these cookies, the cookies that are categorized as necessary are stored on your browser as they are essential for the working of basic functionalities of the website. We also use third-party cookies that help us analyze and understand how you use this website. These cookies will be stored in your browser only with your consent. You also have the option to opt-out of these cookies. But opting out of some of these cookies may have an effect on your browsing experience.
Necessary Altijd ingeschakeld
Necessary cookies are absolutely essential for the website to function properly. This category only includes cookies that ensures basic functionalities and security features of the website. These cookies do not store any personal information.
Non-necessary
Any cookies that may not be particularly necessary for the website to function and is used specifically to collect user personal data via analytics, ads, other embedded contents are termed as non-necessary cookies. Information that may be used by us or third parties: browser settings, your device\'s operating system, cookie information, other identifiers assigned to the device, IP address, device activity (including web pages and mobile apps visited or used) and geographic location of the device when it accesses a website or mobile application. Purposes for storing information: access of information, ad selection and delivery, content selection and delivery, personalization and measurement.
OPSLAAN & ACCEPTEREN
Skip to Recipe
Follow me!